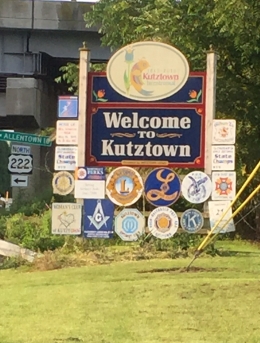 That was what the sign said and instantly there was a rush of excitement that permeated through the van that had been our cell for the past 7 hours. We made it!

But my excitement soon wavered when I spotted the beautiful, LARGE campus that would be my baby’s home for the next three years. Emotions attacked me and tears leaked from my eyes as I struggled to get control. I was taking my baby to college.

Many parents across the country undergo something similar every fall – the packing of the car and transporting your child to a college or university where they will grow in knowledge and in maturity – we hope. Up until this year, I had been lucky to have my daughter commuting to a local university. However, when she set her mind to Library Science, a degree not offered in our state, a move was in order.

I don’t know when, but somewhere along the way of parenting three teenagers I grew complacent in our family arrangement. The tough part of teaching had subsided into a mutual respect of functioning and we simply meshed together. It has been going smooth for so long that sometimes I even forget that I’m still learning to be a parent.

We’ve done the back to school thing for 16 years now. Even starting college and navigating that wasn’t a big deal because I’ve been going to college as well. We knew where to go, what to get, and how not to be overwhelmed by the ordinary. We were veterans among many of our peers. This past month changed that. I was reminded that there are still a few things I haven’t done in way of parenting and moving a kid out of state was one of them.

For the first time since she began kindergarten I found myself not only feeling like a clueless mother but emotionally distraught. Perhaps if she were living closer I wouldn’t have been so stressed, but 7 hours away, well, one can’t simply run home if there’s a problem. We had to be organized and on point. Thanks to the power of the world wide web and social media the questions soon were answered…mostly.

We were among the many first time parents, looking around with a mixture of wonder, fear, and panic. We were the adults. Our child depends on us to know what we are doing but that day I was smacked in the face with the reminder that I’ve no clue what I’m doing and this time my kid knew I had no idea. We were learning together. We asked for help, read bulletin boards, street signs, and maps…we figured it out together and we survived.

After a long morning of unpacking, walking, and questioning it was finally time to go, after all there was a wonderfully long drive back home to make. But as we stood in the dorm, a bit awkward and very tired, I saw that she was ready. Just like when I took her to kindergarten, she was focused on the present, ready for the awaiting adventure, and I knew that it was time for me to go, to give her the room she needed to grow. We hugged, said some I love yous and parting advice and left. No tears, not then anyhow because I had the comfort of knowing she was ready to take this new challenge on.

As we slowly walked to the car, my daughter left behind, I felt a strange sense of pride and accomplishment laced with my fear and sadness. We had done it. We had raised a human being. Sure we messed her up in multiple ways, that’s what parents due, but we didn’t kill her. The weeks that were spent living on fast food because of crazy schedules hadn’t proved to be the end of the world. The dishes left undone, or the trash that wasn’t taken out, hadn’t stunted her ability to take responsibility. The few disagreements that transpire hadn’t changed the fact that we loved one another. Suddenly you are reminded about perspective.

You go into parenthood with a vague idea of what to expect and what to do. Within three hours of giving birth you realize you have no clue what you’re doing and all you want is to survive it.

Now when I get a phone call from my daughter, I can hear not only the excitement, but a maturity in her voice that I may have never realized had I not allowed her to fly.